A golf course closing is not a new phenomenon. Since the economic downturn in 2008, hundreds of courses around the country have been shuttered. This year the Philadelphia region will lose three public courses in the coming weeks. Two are local for me in eastern Montgomery County, while the other is within Philadelphia city limits. While from a quality standpoint two of the course are among the worst in the region, losing the three courses will make a significant dent in public golf options in their respective geographies.

Limekiln GC will close 12/2 and be converted into another 55+ housing community. One of the few 27-hole facilities in the region, Limekiln was most famous for its former owners, the Philadelphia Phillies pitching duo of Curt Simmons and Robin Roberts. Located off Limekiln Pike in Horsham, the original 18-hole course  was first known as Oak Park GC and built in the 1930s by Alec Duncan, long time pro at Philadelphia Cricket Club. The course was altered throughout the 1960s and 1970s, and then expanded to 27 holes in the late 1980s by Al Janis (adding the Blue nine). Jim Blaukovitch (Bella Vista, Island Green) made additional alterations in the 90s, especially to the greens.

Limekiln was decidedly old school. Only in the last couple years did they start to offer 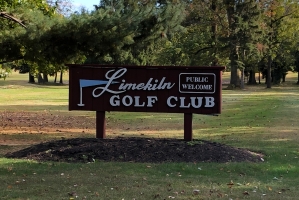 online tee-times. They still printed the receipt onto the scorecard. While a nice enough layout, it was too expensive. Usually in good condition, at a weekday price of $59 to ride and a weekend peak of $75, it was never quite worth the price of admission. Twilight rates only started at 4pm, and even then the discounted rate wasn’t a great value.

The three nines made for a perfectly fine golf experience. Not especially memorable or interesting, I liked the newer Blue nine most, but even then there is little I’ll miss. The closing of nearby Horsham Valley likely prolonged it’s lifespan, and it was fairly busy so the other local courses will benefit (PineCrest, Five Ponds and Fairways). Click here for Joe Bausch’s photo collection.

Upper Dublin GC is set to close 11/30 after Upper Dublin Township chose not to renew the lease. Fortunately, the property located off Susquehanna Road is destined to remain open space as a park. Previously known as Burn Brae GC and then Twining Valley GC, the first nine holes were built in 1931, designed by Scotsman Jock MacKenzie, who leased and then bought the property. The second nine was added shortly after. (I’ve also seen the design attributed to Jock Melville, who also built NLE Horsham Valley GC.) Click here for the Bausch photo collection.

By any measure UDGC was not a very good golf course. Of the 19 holes on the property (a hole was often closed for repairs), it’s hard to find one that would be considered well designed. Many are frustrating and poorly conceived. Conditions were generally poor and trees have overgrown much of the playing corridors. The long-time operators have tried to make improvements, but there’s only so much that can be done with a course so poorly designed and little money to invest. Still, the course provided very affordable golf to a community with few other public options. Kids could play for free in the afternoons and the peak rate was only $40 to ride. Twining Valley was one of the courses I grew up playing regularly, so while I didn’t especially like the course, I’ll still miss it.

Admittedly, I’ve never played FDR. Growing up the Northeast, I’d have to drive by the other city courses to get there, plus ignore the options in lower Bucks and eastern MontCo. By all accounts I haven’t been missing much, with conditions generally ranging from bad to atrocious. Still, it provided the city with a low cost option that introduced thousands of people to the game over the years. Like many things about Philadelphia, with a little TLC it could have been much more.

FDR was created as a Works Progress Administration (WPA) project in the 1930s to become League Island Golf Course. Built in a swamp on top of construction debris from the Broad Street Subway line expansion, the course suffered major issues from flooding over the years. FDR had served as the home of Philadelphia’s First Tee program. Going forward, the city is planning to redevelop the land into additional park space. Click here for the Bausch photo gallery.

Both Upper Dublin GC and FDR GC seem poised to become additional park space. Both communities already have ample open land for recreation, but both lack affordable, interesting golf. There are numerous, excellent examples of community golf around the country. I visited one in Oceanside, CA this summer called Goat Hill Park, which I’ll write more about in a separate post. Originally built in 1952, it languished under mismanagement in the early 2000s. In 2014, the community stepped in and it has been re-imagined. It features an executive (short) course intermingled with a Disc Golf course. They have a terrific driving range and putting green and a 3-hole children’s course called The Playground. Now it’s thriving.

Eastern MontCo in particular has suffered a number of golf course closings in recent times. Two courses closed last year: executive course Meadowbrook GC in Abington and Center Square GC in Blue Bell (for housing). Another two closed 2012: Island Green in NE Philly and Horsham Valley GC (McMansions), with Ashbourne CC (Cheltenham to over-55 community) shuttered in 2008. A nine-hole executive course in the Far Northeast called the Quartet Club has also recently closed. With close proximity to the city, it’s easy to understand why valuable land is being converted to housing. But the closures have left a significant geographic hole for public golf.

Close to Upper Dublin, Abington Township’s Alverthorpe Park is a great mixed-use community park. Along with walking trails, playgrounds, tennis and basketball courts, a fishing pond and baseball diamond, they have a 9-hole par-3 course and an old-school mini-golf course. I would love to see Upper Dublin improve on Abington’s model. A short course and grass mini-golf course would be unique to the area and generate revenue to offset the park’s development and operating costs.

With Philadelphia’s rich golfing history, FDR’s closure is perhaps the most harmful course closure in a long time, leaving only five public courses within city limits. Philadelphia boasts the most park space per square acre of any major US city, but we lack community golf facilities. The redevelopment of Cobbs Creek will be terrific, but it’s still a long way off and located in a more remote section of the city. FDR is easily accessible by public transportation or car, so a facility with a driving range, short course (like the Cradle in Pinehurst) and putting course would be quite popular.

This site uses Akismet to reduce spam. Learn how your comment data is processed.